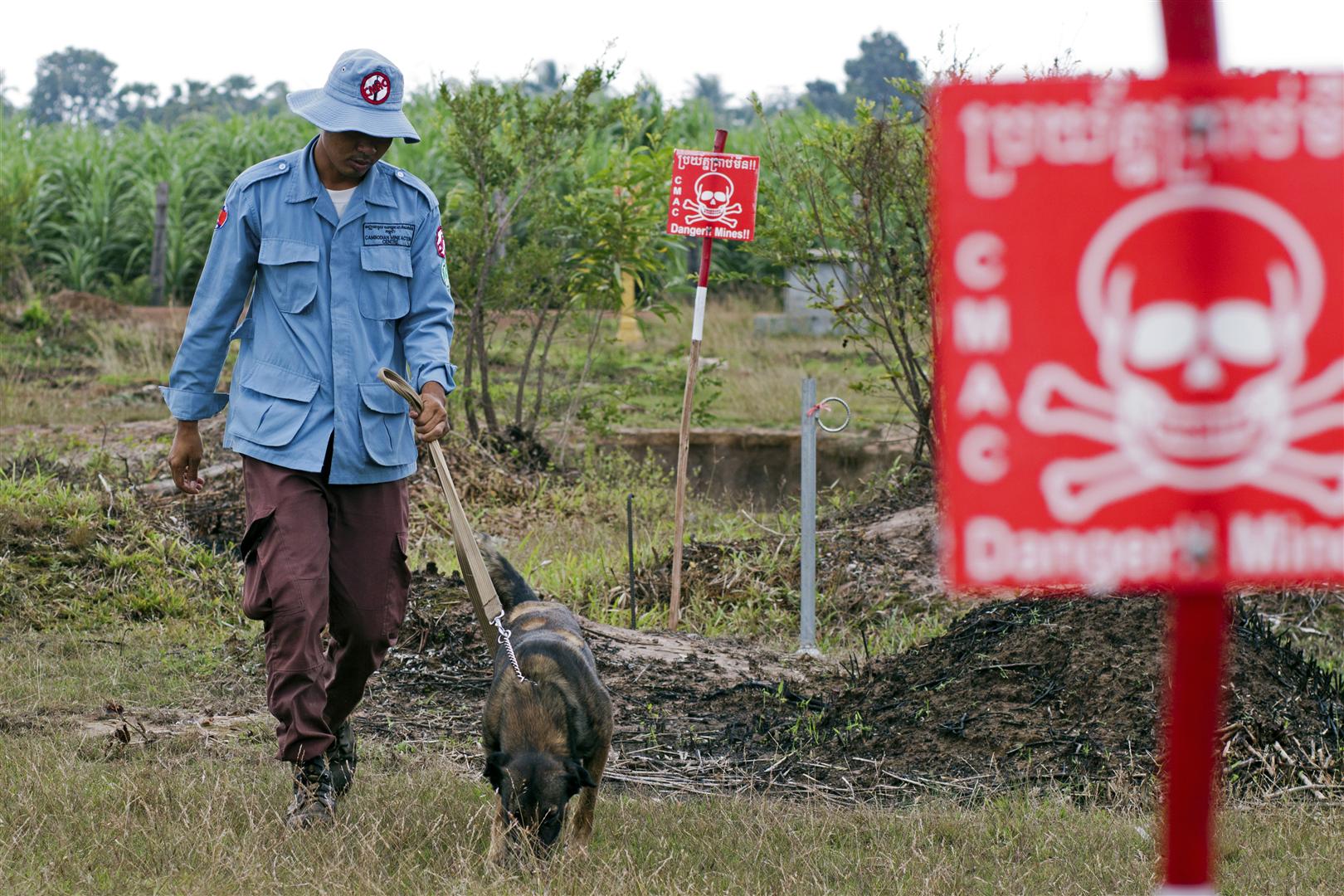 Read story at The Diplomat here or below. Published May, 2012.

Working in the fields isn’t typically considered a dangerous job. But with plantations still littered with unexploded ordnance, some Cambodians are looking for companies to step up.

Frustration grips Von Tha’s face as she fumbles with a hand that no longer works. Ron Run says that seeing his wife’s physical and mental struggle has, for him, been one of the hardest parts of the family’s ordeal. Two months since the explosion at a cassava plantation in Kratie, and the group of five are still feeling its effects. It’s a case that underscores the danger for workers at contaminated sites.

In Cambodia, companies and landowners can choose whether or not to clear areas used for commercial purposes such as agriculture, mining or ecotourism. With improved access to previously difficult to reach areas comes increased economic interest in utilising the land. Accidents on land used for enterprise illustrate the importance of ensuring known-risk areas are cleared of explosive remnants of war (ERW) before workers can enter the site and start tilling the soil.

Run explains that he, his wife Von Tha, brother-in-law Kith Ol and two nephews Ann Yong and Et En, arrived to work at the farm in Kratie’s Snoul District a few days before the March 17 accident. The family stood around a fire, cooking dinner after a long day in the fields, when flames suddenly engulfed the group. The explosion was caused when the heat detonated an explosive remnant. All five people needed medical treatment. Tha and her brother Ol were standing the closest and were critically injured. Run and his two nephews, Yong and En, were standing further back, but were still badly burnt and their skin was shredded by shrapnel.

“There’s no legal obligation for the landowners to do anything,” he says. “What happens is that people start working and if there is an accident, there is no one to take responsibility. This is best addressed if you havea national law, like a law to use a helmet or to have registration on your vehicle.”

Placing regulations on clearance activities in known contaminated areas was recommended by Støa, who says that when land is being used for commercial purposes, it should be mandatory to conduct clearance using an approved operator. Then, if there is an accident, the land owner or developer responsible for the clearance would have to compensate victims of ERW in the work place. At the moment, there’s no protection for workers or a policy for ensuring that they are paid damages.

In addition to coping with serious personal loss and physical trauma, accident victims are put in debt at precisely the time they have no income. This is especially problematic for people who are living at subsistence level, like Run and his family. Run commented that the couple would make a combined total of $7.50 each day at the plantation. The cost of one hospital bed per night was almost as much as their daily combined income. Tha’s medical bill was around $500. Gratefully, he says that two charities stepped in to cover these expenses. Run borrowed an additional $375 from a friend, for food and living costs while they were unable to work and said he will do his best to repay this debt.

“It’s hard for me. I worry about my wife. Before the accident Tha could move normally. Now she cries a lot about things she can no longer do. She still cannot move her hand and this is very upsetting for her,” Run reflects. “Making life harder is the fact we owe money. Everything is difficult at the moment.”

By Run’s estimations, the farm where the accident took place in Snoul covers around 30 hectares,with 20 people working there. Bombing data of Snoul shows a saturation of ordnance and cluster bomb strikes. WhenRun and his family members arrived, they were unaware the site was contaminated. Since their accident, another worker has reported finding a cluster bomb at the site. “They still work because they are far from home and need the money. They can’t be choosy. These workers have no connection to an organization so when they find one [an ERW] they just leave it there and tell their friends,” Run says.

The survivor agreed that companies should be required to professionally clear any explosive remnants from land being used for commercial purposes. He added that if he wasn’t approached with a job offer after the accident, he would have returned to work at the plantation where he was injured.While the survivor was under the impression the plantation had been cleared since the accident, a call to demining operators working in the region showed this wasn’t the case. Whether it has been cleared or not, driven by the desperation that is linked with lack of options, workers are willing to risk their lives by knowingly working on contaminated land.

So when it comes to workplace safety, where should the responsibility lie?

H.E. Heng Ratana, director general of the Cambodian Mine Action Centre, says that companies may try to demine themselves but will not thoroughly demine, only dealing with explosive remnants at surface level, or contract a third party to undertake clearance work.

“Owing to the economic cost, companies less worried about being professional are more likely to use cheap ways of demining or use their own excavators until one day there is an accident,” he says. “There’s no enforcement due to limited resources and inadequate legal grounds to hold landowners to account.” He stresses that safety regulations should be required for companies and that strong enforcement needs to be effectively and actively pursued by all relevant sectors before the land can be extensively used.

One example of the way land is cleared to create farming areas is hiring someone with an excavator. Mung Long does this kind of work. Most of his contracts have been along the road from Kampong Cham to Kratie where he regularly unearths cluster bombs and other explosive remnants. “When I find them, I put them in a pile and put more earth on them. In the 10 years that I’ve been doing this, I’ve found a lot of things and I always report the findings to the village chief.”

Land pressure for enterprise in Cambodia is causing people to push into areas that have never been surveyed or cleared.East of the Mekong the explosive legacy is largely left over from the Vietnam War. From 1965 to 1973, the United States dropped 2,756,941 tons of bombs over central and eastern regions in an attempt to cut the Ho Chi Minh Trail, more than was unleashed by the Allies in all of World War II. Another significant element of Cambodia’s explosive legacy is landmines. These are mainly concentrated in Western Cambodia, but landmines also litter other regions; a result of decades of civil wars that presents a hazardous situation for today’s workers.

In Vietnam, laws exist that require land to be declared safe before being utilized. These regulations mean that anyone who wants to build or use land for agricultural purposes must get a certificate from the provincial authority to say that the land is free from ERW. Støa said that Cambodia could have a similar system. “This should be initiated by the Cambodian Mine Action and Victim Assistance Authority which is the national authority and it should be supervised and followed up by police.”

He points out that instead of requiring a clearance certificate for every plot of land, as in Vietnam, the results of the Baseline Survey (due for completion in December) could be used to flag suspected hazardous areas. Hesuggests that any commercial activity within known dangerous areas could then be assessed. “You could easily implement a system by January 2013 that regulates the development of land for any purpose by requiring people to contact CMAA. If the land is known to be dangerous, then clearance action should be obliged and if it’s outside of hazardous areas then people could go ahead with their activities.”

H.E. Prum Monkol, deputy secretary general of the Cambodian Mine Action and Victim Assistance Authority (CMAA), agrees with the need for better protection of workers. He believes that CMAA should start this process by drafting regulations. “If a law was passed, then an inclusion to Cambodian Mine Action Standards could be written stating that no land shall be released for commercial purposes until such time that a legal certificate of clearance is obtained by the developer after clearance has taken place.”

But while approving of the need to create regulations, he says he’s concerned about the people who could be negatively impacted by tighter controls on clearance. “One thing to be considered is that private landowners might not have the funds to pay for commercial clearance,” he says. “Thus creating a situation where landowners can’t use their own land. I am referring to the poorer people here and not rich landowners.”

It’s important to consider the implications of such laws on poorer farmers. Landowners earning just enough to live on running a small farm could be bankrupted by adding clearance to their list of costs. Any laws would have to be crafted to ensure less wealthy individuals can still be engaged in small-scale agricultural investments. While the potential impact on poorer farmers must be measured, if a system such as the one described above was introduced, then there would be protection in place for people like Run and the rest of his family. Laws on commercial clearance would effectively give victims the right to seek compensation. If the developer or landowner, by law, was supposed to certify clearance of ERW and then there was an accident, a new level of accountability would be created.

With limited work prospects, Run has been considering going back to work at the cassava plantation where the accident took place. Earlier this month, he was approached with a job offer. Cambodian Harvest Dried Fruit based in Phnom Penh employs landmine and ERW accident survivors and aims to empower these individuals to be able to support themselves. He’s staying in Phnom Penh, while Tha recently returned to their village in Prey Vieng after her second skin-grafting operation in the country’s capital. Tha is still unable to work. She waits with a mixture of frustration and hope to be well enough to do everything she was once capable of.