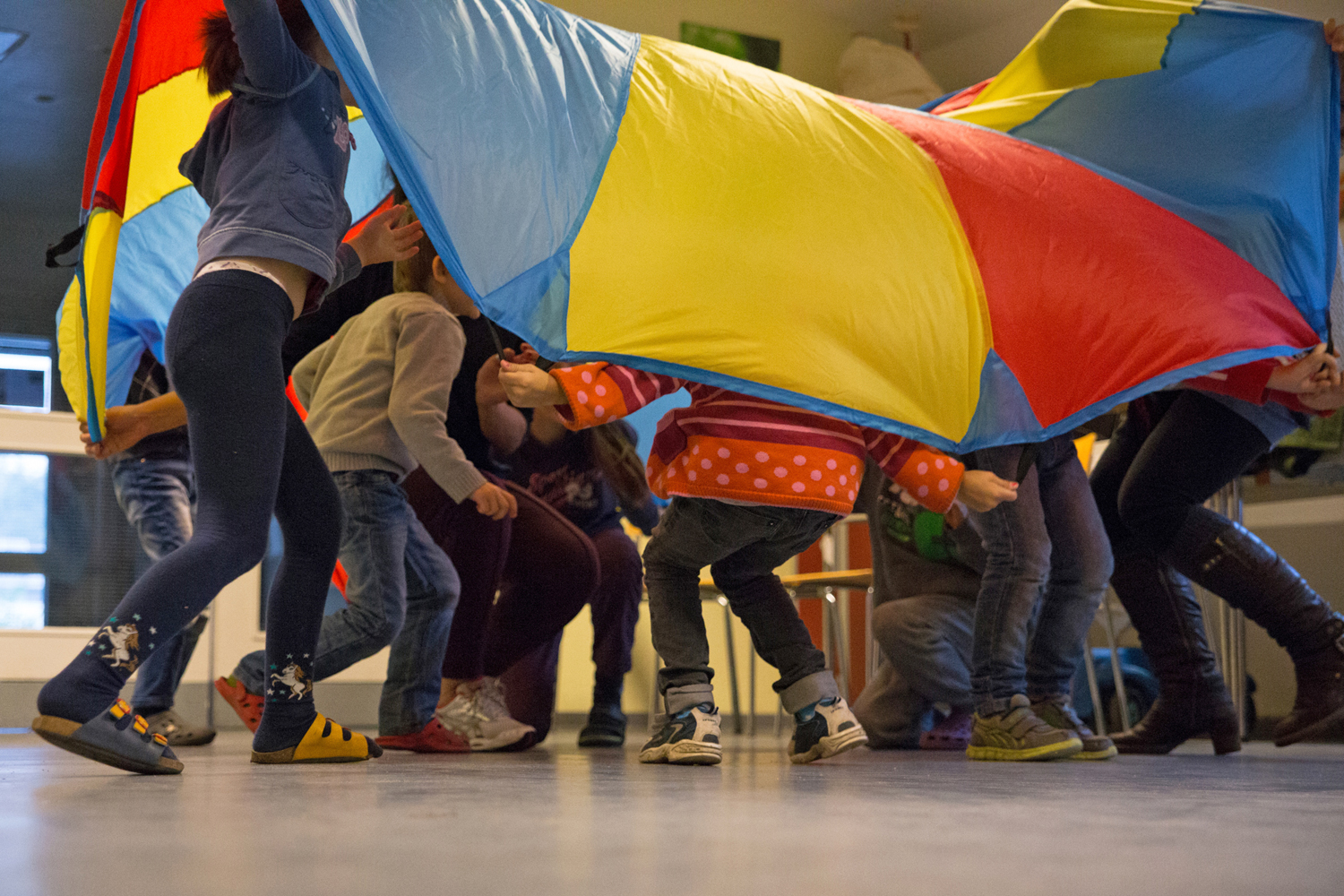 A Hamburg-based project is providing help for traumatized refugee children through storytelling and art therapy. Gemima Harvey went along to take a look.

The first thing you notice entering the room are the colorful bolts of fabric that have been set up on stands to create a backdrop with small woven mats forming a circle in front. Children from families that have fled persecution and conflict in countries such as Afghanistan and Iraq start to arrive in the refugee camp’s activity room. The camp called Jungenparkweg is home to about 130 people and is located in the town of Langenhorn, in the city-state of Hamburg. Entering the room, children aged between four and 12, who have just finished preschool and school classes in the nearby town, greet their storytellers Roana Falkenberg and Asma Qwaider.

Tellers without Borders (TWB) is a project initiated by Micaela Sauber, a storyteller with experience working in war zones, including with the Friends of Waldorf Education’s trauma initiative. In Hamburg, TWB delivers workshops designed to build up a sense of stability for children who are living in refugee camps, using a diverse toolbox of techniques including art, play and storytelling to reconnect children with their inner selves. “What we are doing is unique. It is a mixture of trauma pedagogy, art therapy and curative story telling,” Sauber told DW.

“Children who have lost their homes and have trauma need stabilization because they are out of every order and can be disturbed in their development. Different elements of the routine help children to feel at home again in their bodies,” Sauber said.

Each two-hour long session begins and ends with everyone holding hands in a circle, before saying together, in German, and illustrating with body language, “Above me the sky, beneath me the earth and here am I.” Body percussion is coupled with songs which are made up from a fantasy language taught by a trauma and dance therapist. These songs are followed by games with social interaction giving the children a chance to play together. 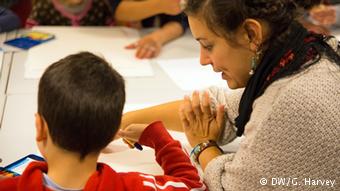 Then Qwaider shows the children a pattern to draw, wave-like lines with circles in between them that fill the page, a soft structure for the children to follow using crayons. Story time is up next. This story is called the “The Little Lantern” and was written by the Palestinian author Ghassan Kanafani for his niece. Falkenberg narrates in German and then Qwaider relates the same part in Arabic before they move on to the next segment of the story. Finally, the circle is formed again and the group repeats the grounding chorus.

“Each session our relationship with the children grows, they get to know the games, have a chance to play and feel hope. The children know they can come to the same place each week and expect the same thing and this creates stability, which is important,” TWB facilitator Qwaider told DW.

Zareta Janchotova, from Russia, lives at the camp in Langenhorn with her husband and their five children. She said her family like it there – they have lived at the camp for the last year and a half. “In our country there are many problems. We don’t want to go back.” Her youngest son and daughter, Ramsan, 6, and Jachita, 7, attend the Tellers without Borders sessions each week. “My children are excited to see Roana and Asma. They are very happy when they get home after the workshop. Ramsan and Jachita tell me how much fun they had playing and that they want to go again tomorrow.”

Art therapy is among the techniques used by Children for Tomorrow (CFT) to help raise self-esteem, strengthen identity and process traumatic pasts. CFT is a non-profit foundation that in partnership with the University Hospital Hamburg-Eppendorf (UKE) runs the Outpatient Clinic for Refugee Children and Adolescents. Working to heal the mental wounds of young refugees who have escaped war and peril, a team of doctors, psychologists, psychotherapists, art therapists, educators and interpreters support 250 children under 18-years old at the clinic annually. The specialized program tends to psychological scars and post-traumatic stress disorders of patients from 17 different countries, treating symptoms such as anxiety, insomnia and depression.

Refugee children and adolescents are generally referred to the outpatient clinic, by staff at schools or accommodation centers, after six to eight months of arriving in Hamburg because they have been behaving ‘conspicuously.’ At the clinic, children receive focused attention on their struggles and symptoms.

Cornelia Reher, therapeutic head of the outpatient clinic, said in a recent article for public broadcaster NDR: “If a post-traumatic stress disorder is left untreated, it leads to physical damage.” There are also other problems linked with untreated trauma, such as difficulty concentrating in school and socializing, impacts that may carry on into adult life and have flow-on effects for integration. 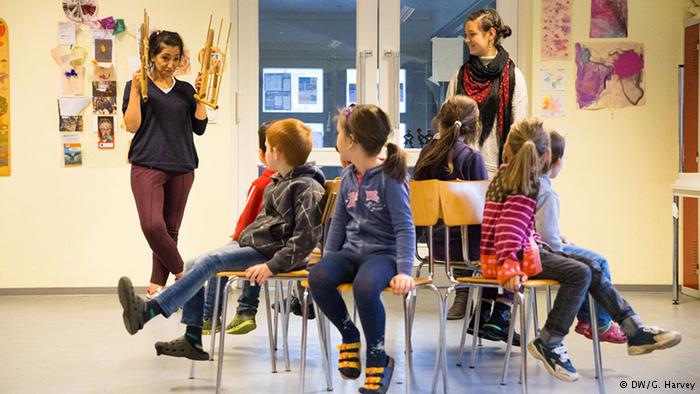 Schnackenburgallee refugee camp is a reception center on a former parking lot near Volksparkstadion, where Tellers without Borders also runs sessions. Schnackenburgallee consists of an area filled with tents for new arrivals, where about 1,000 people are living, and a container village where some 1,500 people are housed. TWB’s Falkenberg said around one third of refugees staying there are from Balkan countries, while others are from Iran, Iraq, Syria, Afghanistan, Eritrea and Somalia. She told DW that women and children have priority for transfer to other accommodation sites but that there were currently still 350 children in the camp.

Three trauma therapists are available for consultation and activities such as music, breathing and art therapies are offered to children and adults at Schnackenburgallee.

TWB volunteers prepare the space for the day’s session, making it as cozy as possible before gathering the children. The workshop begins, “Above me the sky, beneath me the earth and here am I.”

Reflecting on her work, Falkenberg said her fondest moments were when the children could “accept a silence and peace within themselves.”