The need for livelihood opportunities for refugees in Indonesia 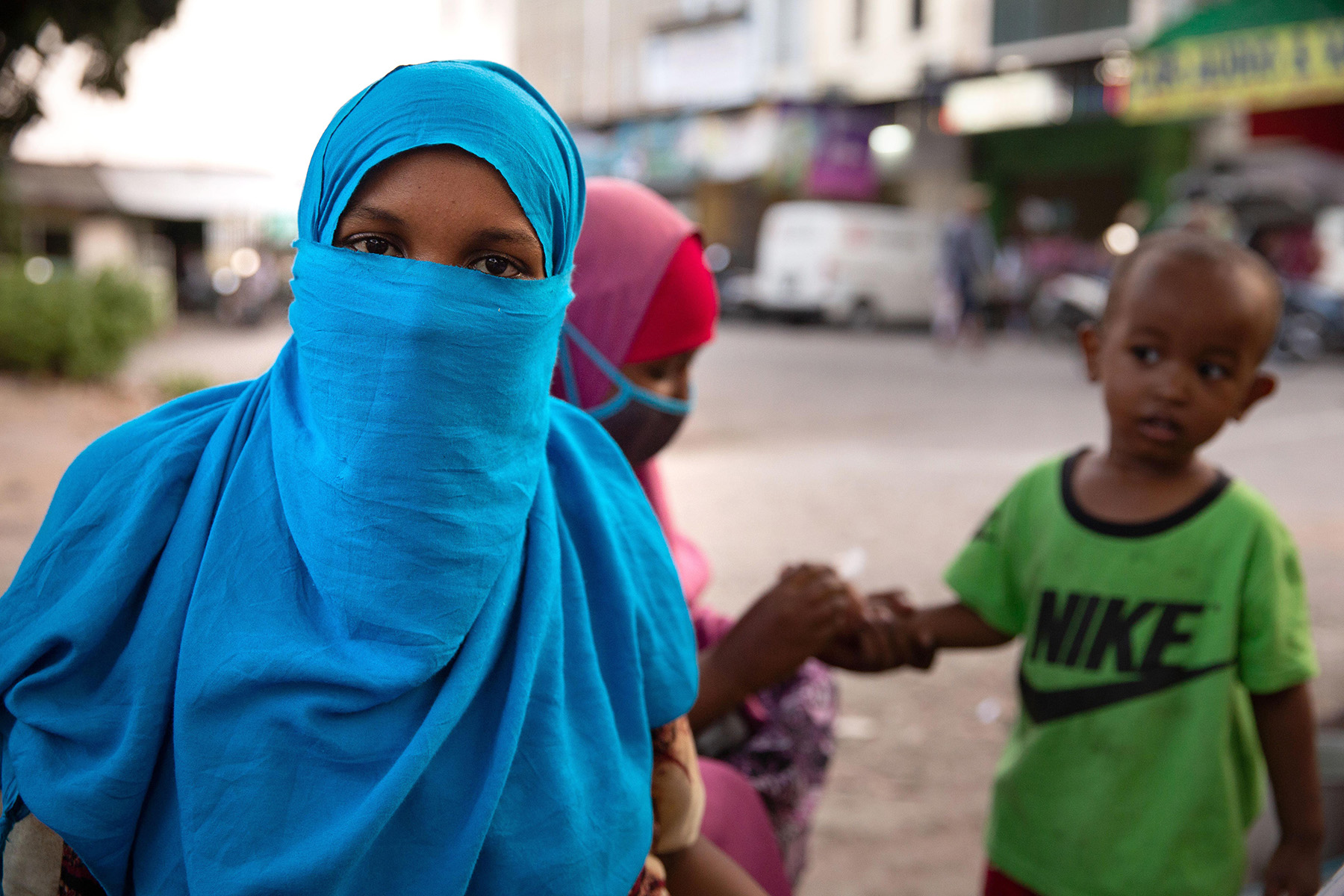 Read story at Asylum Insight here or below. Published August, 2019.

A dentist appointment in Australia gave unexpected insight into what could be described as a typical conservative attitude toward asylum seekers coming to Australia. Asked what I’d been doing that day, I mentioned my Master’s thesis looking at livelihood strategies of refugees and asylum seekers in Indonesia. “What I don’t understand,” the dentist said, “is why Muslims want to come to Australia when they are already in a Muslim country.”

The answer is simple really – refugees and people seeking asylum have no rights in Indonesia.

This article spotlights the struggles that refugees in Indonesia face and how they survive with few resources and limited support. Livelihood activities – initiatives that foster self-reliance by creating access to training, skills development or income generating opportunities – are critical in improving both material and mental states.

Refugees and asylum seekers are not allowed to work, face barriers to education, and cannot become citizens. Prohibited from working, many asylum seekers and refugees in Indonesia go hungry. Prevented from using their skills, they grow tired and sad. Those not receiving remittances, or support from organisations, live in overcrowded rooms or in tents on the street. The themes of uncertainty and deprivation arose again and again during my thesis field research. Xaali* summed up her struggle, “For my future, there is no light, there is no way I follow now to get my future…I hope in the future that I will get a better life than this, to cover my needs, to make my own decisions, to have a family.”

Indonesia was once purely a place of transit, a stop on the way to countries where refugees and people seeking asylum could access basic rights and rebuild their lives, either by travelling onward to Australia or waiting to be resettled.

However, the situation changed in recent years. Australia’s deterrence policies mean that getting on a boat southward bound in an effort to reach the country’s shores is no longer an option — people seeking asylum are either turned back or sent for offshore processing. At the same time, resettlement opportunities have been shrinking as a result of stringent policies in both Australia and the United States. The United States, traditionally a key resettlement country, slashed its overall resettlement quota by more than half in 2017. Australia announced it won’t resettle refugees from Indonesia who arrive after 1 July, 2014, and also cut places by about 50 percent between 2013 and 2017, down to 433, and in 2018 resettled just 84 people.

With resettlement no longer an option for most, and rights restricted in Indonesia — the 13,800 refugees and asylum seekers are stuck in limbo, unable to go forward or back and prevented from being productive in their prolonged state of transit.

An Australian government document, released under FOI, notes the policy of not resettling any recent arrivals was expected to lead to a decrease in the number of asylum seekers travelling to Indonesia. However, since then, the number of asylum seekers and refugees in Indonesia has increased by almost 25 percent. In 2018, the Australian government also stopped funding the International Organization for Migration (IOM) in Indonesia to provide material support for newly arrived asylum seekers.

Australia should show solidarity and responsibility sharing with its neighbour and resume resettlement of refugees from Indonesia.

Unless resettlement countries revise their policies, what was once a temporary, albeit prolonged, stay in a “quintessential transit migration country” is likely to become permanent. And unless Indonesia allows refugees to work so they can support their lives there, dependency, poverty and vulnerability will become further entrenched factors of daily life.

This month, more than 1000 refugees protested in front of UNHCR’s Jakarta office, calling for solutions to their limbo.

With the reality of reduced resettlement options comes the need for refugees to create the fullest lives possible in Indonesia, because without any other options, life in Indonesia is the foreseeable future. The need for self-reliance is particularly pertinent in protracted situations where there are no durable solutions in sight. Eveliina Lyytinen and Janosch Kullenberg compiled a report based on a round table about urban refugee research. They note the “adaptive process of informally but permanently settling in urban areas may have to be considered as an addition to the traditional ‘three durable solutions’ (integration, resettlement, repatriation).” This point is acutely relevant when considering the situation in Indonesia, where, for most, none of the three traditional durable solutions (listed above) are available and refugees have no choice but to find solutions for themselves.

The vital role that volunteering, vocational training and livelihood activities have in boosting morale and creating a sense of community cannot be overstated. The refugee-led initiatives that have sprung up to fill service gaps and provide meaningful activities and learning opportunities are transformative places that glue communities together, and prevent people from slipping too deeply into the despair that comes with waiting for life to begin. Dorakhshan* underscored this point, saying that people suffer mentally when they have nothing do and that livelihood activities were good for her health. “These activities give me a sense of purposes. Thank God I am having something to do. My friends who are doing nothing suffer from depression.”

Forced into a state of protracted transit, the pursuit of learning new skills, using existing ones, interacting and feeling a part of something are critical in creating meaning and purpose that counteract, to a varying extent, the sense that life is not moving forward despite the years passing.

With restrictions around livelihood options for refugees currently, it is social connections and skill sets that aid in improving livelihood outcomes. Interviewees used their language, teaching or artisanal skills, where possible, which allowed them to form networks and build doorways to donations, in-kind support and mutual assistance. The research participants with strong social networks, whether with other refugees, Indonesians or expats, made through learning centres, religious congregations or charities, were best able to provide for themselves. Having opportunities to participate in society helped refugees to form relationships, provided incentives to learn Bahasa Indonesia and ultimately boosted resilience by establishing more places that people could turn to ask for help.

For those who cannot afford transport or to buy water, the much-needed respite of learning centres remains out of reach. When people have no hope and no options, they are forced to pursue negative coping strategies, whether sleeping all day and becoming more depressed or choosing to sell their bodies rather than starve.

“I have many skills like cooking and child minding. If I was able to work, I could provide for my children, I could give them a good life but I am not allowed to work. The situation here is not changing. There are people who have been here since 2012 and they are still waiting. I don’t know where this life is going.”

Without being able to create livelihoods, refugees will continue to suffer, and the skills they could be contributing to Indonesian society will be wasted.

“By allowing them to work, refugees would be contributing to the economy and maybe at the end of the day creating more opportunities, creating new jobs, accessing new markets because they have networks back home, and actually giving refugees something to do and a reason to integrate because work in our lives is the way of being part of society, it is contributing to your community, to your society, to your nation but also taking part in social life; most of it is done through work in our adult life and so it would be a positive step.”

Yunizar Adiputera and Atin Prabandari highlight that the “entrepreneurial character of refugees, if harnessed well, can go a long way in benefiting the local economy.” They also put into perspective the possibility that refugees’ access to the labour market could potentially affect access for Indonesians, pointing out there are 11,266 refugees of working age, negligible when considering that in 2016, there were 131,544,111 Indonesians in the labour force, with a 5.33% unemployment rate. Additionally, they emphasise the benefits of creating avenues for host-refugee relations and shifting away from the handout model, which fuels social unease. Even though financial assistance given to the most vulnerable refugees is “barely at subsistence level,” a perception of unfairness exists because they have not earned it.

To alleviate concern about unemployment rates among Indonesians and market impacts, a list of job sectors that the government would let refugees work in, initially, could be created. Indonesian foreign ministry’s Vinsensius Shianto wrote last year that it would be difficult for the government to allow refugees to work:

“Yet, if we are willing to accommodate them based on humanitarian concerns, the key solution is to find a particular sector in our labor market where there is a gap in supply and demand, so the refugees could fill it with their unique expertise, like teaching foreign languages. In order to do that, the government should work together with business leaders and civil society.”

In line with this thinking, and in building the pathway to work rights, research could be carried out into areas of skills shortage in Indonesia, and programs could be established that connect refugees with markets where their skills are needed. Vocational training and internships could then focus on matching skillsets with market shortages.

It should not be left to Indonesia alone to integrate asylum seekers. A combination of durable solutions is needed. This means Australia stepping up instead of turning its back on the issue. It remains to be seen now, with resettlement no longer the main durable solution and the IOM no longer able to support new arrivals, whether action will be taken by the Indonesian Government to allow refugees to become self-reliant.

By allowing refugees to earn money to support themselves and their families, the creativity, skills and potential that exists among these communities can flourish, along with the people themselves, to the benefit of the society they have no choice but to call home.