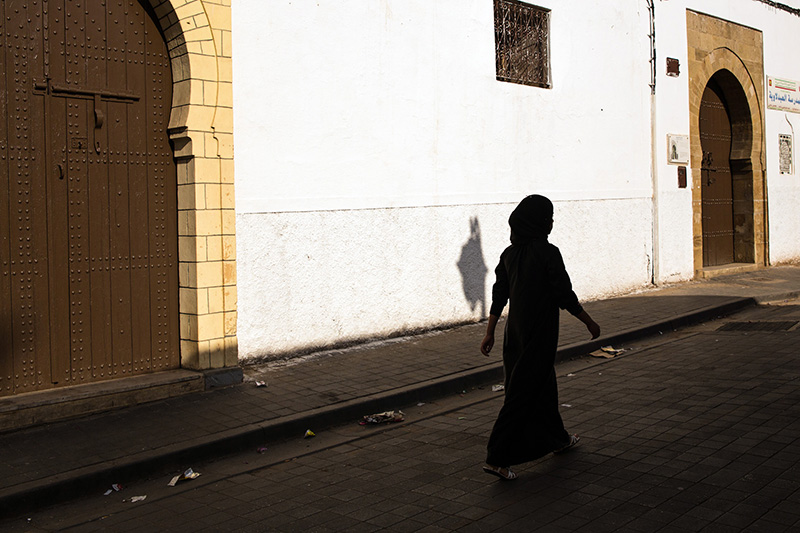 Heading up the stairs of a house in suburban Casablanca, a wave of children’s voices and flurry of movement create a sense of shared space and solidarity. This is a safe haven run by non-government organisation INSAF (National Institute for Solidarity with Women in Distress). Each floor of the building is filled with ladies going about their business — some lounge on couches breastfeeding babies, others sit patiently waiting for appointments with social workers, small children tugging at their clothes, staff croon to a crowd of noisy infants in the nursery as their mothers learn to cook, cut hair and sew.

This is a safe haven run by non-government organisation INSAF (National Institute for Solidarity with Women in Distress). Each floor of the building is filled with ladies going about their business — some lounge on couches breastfeeding babies, others sit patiently waiting for appointments with social workers, small children tugging at their clothes, staff croon to a crowd of noisy infants in the nursery as their mothers learn to cook, cut hair and sew.

INSAF works tirelessly to support single mothers — a group affected by systemic discrimination — and to ensure girls attend school rather than work as child domestic servants, known as ‘little maids’ in Morocco.

These two social issues, although on the surface separate, are actually closely linked. Every year, INSAF supports hundreds of single mothers, and while their stories differ in many respects, there is always a common theme — around half of them formerly worked as little maids.

Testimonies in a 2008 government report, on the Worst Forms of Child Labour, underscore the connection between little maids and unwed mothers in Morocco. Women’s Solidarity Association, the first organisation to begin supporting single mothers, conveyed that the majority of women to benefit from its services are former little maids. Similarly, Bayti, which works with street children, recounted that most of its female beneficiaries were working as domestic servants before fleeing to the streets to avoid sexual or physical abuse by their employers.

Exploitation as a child servant, has carved the fate of countless young women, paving their path to single motherhood and afflicting them with a life of struggle.

Girls are sent to serve in strangers’ houses, where, despite parents’ good intentions of sending their daughters to a ‘better life’, the sobering reality of life as a little maid is sketched with hideous shades of isolation, exploitation and slavery.

More than 80 percent of little maids come from rural areas and are illiterate — a reality linked to poverty, the lack of infrastructure in remote regions and a cultural preference for educating sons. These gender norms are perceptively outlined in a Consultancy Africa Intelligence article. ‘’Parents often fail to see the benefits of education for girls and would rather rely on the monthly income that their daughters can provide. Gendered stereotypes are also related to education. Many parents believe that becoming a domestic worker prepares their daughters to become better wives and mothers in the future, while education will only lessen that possibility. Therefore, they consider that it is better to invest in a son’s education than in that of a daughter.’’

The report goes on to note, that many parents think sending their daughters to work as little maids will protect them from pre-marital pregnancy because they will be ‘under the watchful eyes of their employer.’

A member of INSAF’s team explains the sad reality, ‘’Little maids are far from their families, when they are as young as five or six years old and they lack protection, love and support. There is a cultural view that women are made to serve and sacrifice. Little maids are like slaves, always having to obey and in this situation girls are vulnerable to abuse.’’

Despite laws prohibiting anyone under the age of 15 from working, Terre des hommes, which works to defend the rights of children, reports that 30,000 girls aged between five and 14 are employed as little maids in Morocco. UNICEF estimates that on average they are less than 11 years old and work 67 hours per week.

An intermediary, or trafficker, makes the arrangements, acting as a conduit between employer and parents, sending money and assurances to parents, while cutting the line of communication between parents and child. Sometimes the family does not even know where their daughter is. Little maids are made invisible.

Separated from their family and community, girls are not only vulnerable to abuse but also, craving love, feeling alone and abandoned, they are susceptible to the lure of marriage, promises which prove empty at the mention of pregnancy. Regardless of whether pregnancy stems from violation or sexual willingness, unwed mothers are seen as pariahs, a stain on the social fabric, and for this they face intense hostility and discrimination.

Sex outside of marriage is illegal in Morocco, and if convicted, individuals can be imprisoned.

Under the harsh gaze of social and cultural norms, an unmarried girl or woman who loses her virginity also loses her honour and is often shunned by her own family members who seek to distance themselves from the burden of shame. The judgement cast over a women who has sex outside of wedlock is stifling enough, let alone if she has a burgeoning belly for all to become privy to her private deeds. Pregnancy without a husband proves that a woman has broken the law, and — as culture dictates — that she has lost her jewel prematurely, the jewel that holds within it, her honour, and that of her family. This is a serious double standard considering that men are not subject to the same moral scrutiny on the subject of virginity.

These are taboo topics. Speaking candidly about them will undoubtedly stir disapproval and offense in many conservative minds. None of the mothers at INSAF would agree to an interview. And understandably, these are sensitive matters, especially to discuss with a stranger through a translator. However, the deeply ingrained custom that makes these subjects taboo — no matter which mechanism you attribute it to (culture, religion, conservatism, control, fear, ignorance) — allows the stigma against single mothers to continue and the devastating consequences of this discrimination to persist in the shadows. How can damaging social norms be remedied when even to discuss them is seen as improper?

A single mother is likened to a prostitute. For this she is plagued by judgement at every corner, struggling to secure housing, employment and even to obtain vital government documents for her child. Unless an unmarried pregnant woman is fortunate to have an understanding and supportive family, she is left with few options, turning to prostitution, begging on the streets or seeking assistance from charities. The thought of this hostile existence breeds fear and desperation, spurring vulnerable young women to drastic measures — baby abandonment and backyard abortion.

Fear dominants unwed women at the time of childbirth, especially when they are alone. An INSAF report notes that some single mothers, in a state of extreme agitation and stress, will flee the hospital and a team must be mobilised to find them, while others are described as ‘folded in on themselves, curled up in their bed, plunged in shame and silence.’

A national survey conducted by INSAF, found that 27,200 young women gave birth outside of marriage in 2009, and that 8,760 babies were abandoned — an average of 24 babies every day. Of those infants abandoned, about 70 percent were given to orphanages and institutions while the others were ‘savagely abandoned,’ in other words, thrown away to perish. An INSAF team member said it is sadly common for newborns to be found dead in areas surrounding maternity wards, discarded in rubbish bins or left on streets. It is clear that many postnatal single mothers, in an attempt to prevent themselves from being abandoned, by their family and by society, will abandon their baby instead. Founder of Women’s Solidarity Association, Aicha Ech-Channa, has astutely said: ‘‘In the name of shame, ‘hchouma,’ our children are sacrificed.’’

The presence of a law banning sexual relations outside of marriage looms as a threat for unmarried pregnant woman, adding uncertainty and anxiety to an already stressful situation. At public maternity wards hospital workers are called on to identify single mothers and present them to police. However, a number of organisations, including INSAF, are working on reducing the application of this law to shield unwed mothers from imprisonment. INSAF has social assistants stationed at 12 maternity wards in Casablanca, offering new mothers support and access to services, while also sensitising hospital staff to principles of equal treatment.

Abortion is illegal (with the exception of saving a woman’s life), and is a crime which doctors and their patients have been jailed for. Statistics on clandestine abortions can only be estimated, and figures put forward by experts range from 600 to 900 being performed each day, with only about 250 of these carried out by doctors. INSAF’s research of emergency cases in 2010 revealed that single mothers are overrepresented in those women being rushed to the hospital with severe injuries and complications after undergoing backyard abortions. They also found that unwed pregnant women were reluctant to seek medical treatment for fear of judgement and used the hospital only as a ‘last resort’— an emergency or to give birth.

INSAF helps women with family mediation, navigates the legal maze of getting official documents so that children can attend school and mothers can legally work, and provides shelter and job training, among many other services. In providing support to single mothers, the importance of addressing an underlying social issue became increasingly apparent — the use of little maids. The organisation uses education as a tool to improve the lives of Moroccan girls. Since 2007 it has helped reintegrate 300 little maids back into their communities and enabled them to access education, giving parents a financial contribution that helps them afford to keep their daughters at home, and in school. A few of these girls have even graduated from university and several more started bachelor programs this year.

The benefits of education are plain and plentiful but without intervention and support, poverty and gender stereotypes will keep school from reach of many, particularly girls, in Morocco. Placing emphasis on education — creating infrastructure and increasing access for girls — is critical in curbing the practice of using children as maids, and in preventing this, reducing the likelihood of girls becoming single mothers.