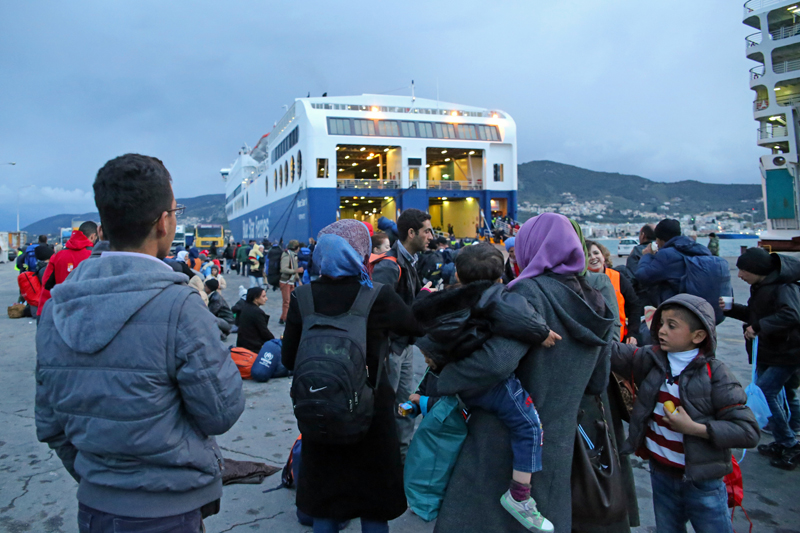 As Brussels and Turkey haggle over the distribution of refugees, their real fate is being played out on the shores of the Greek islands. Gemima Harvey joined two Syrian families to hear about their odyssey to Lesbos.

As Mustafa Alhamoud talks about the lingering trauma of the boat journey between Turkey and Greece, tears form in Movida Omar’s eyes and flow down her cheeks. One of her sons, Riad, 20, stares at the floor of their temporary shelter, a UNHCR container at Kara Tepe, which is a transit camp for Syrian and Iraqi families on Lesbos.

Members of the two Syrian families, who crossed the Aegean Sea in the same boat, sit around together feeling the burden of their shared experience. The weight of not knowing whether they would survive the passage stays with them and haunts their sleep. “The three-hour journey felt like three years,” Movida’s husband Imad told DW. “The whole time I was thinking about what I would do if the boat started to sink. Who would I try to save, my children, my wife, my mother?” 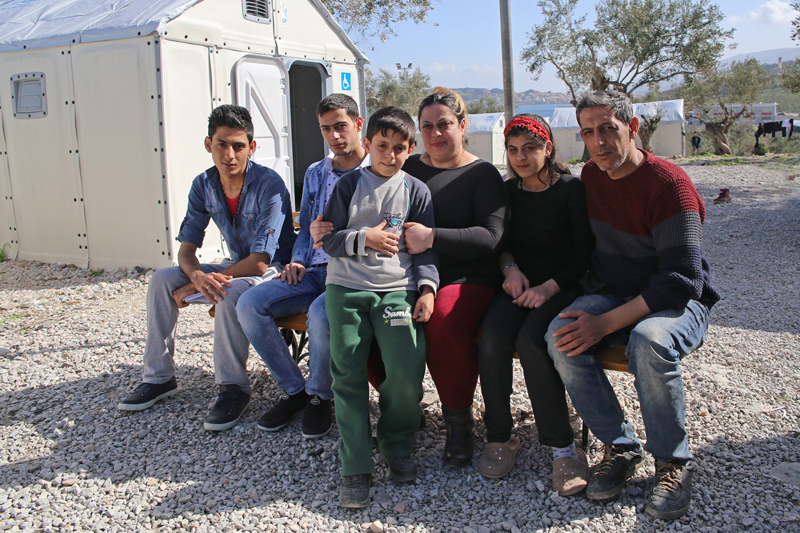 The Omar family at Kara Tepe.

Their boat, designed for 10, was packed with about 50 people, the children and the frail piled up in the middle of the dinghy, including Imad’s 72-year-old immobile mother, Arefa, who they took turns carrying, and paying people to carry, for hours through the mountains as the family made their way covertly from Syria to Turkey.

Imad, a Kurd from Aleppo, said he owned a clothing-printing factory and had a good life before the protracted conflict – his family tried moving to other cities in search of safety but the war kept following. Movida’s hair was falling out from fear and fretting about the future of their four children. “There are no schools, no hospitals, no chance at life,” she said, “We worried that our older sons would be taken by the Free Syrian Army to fight.” 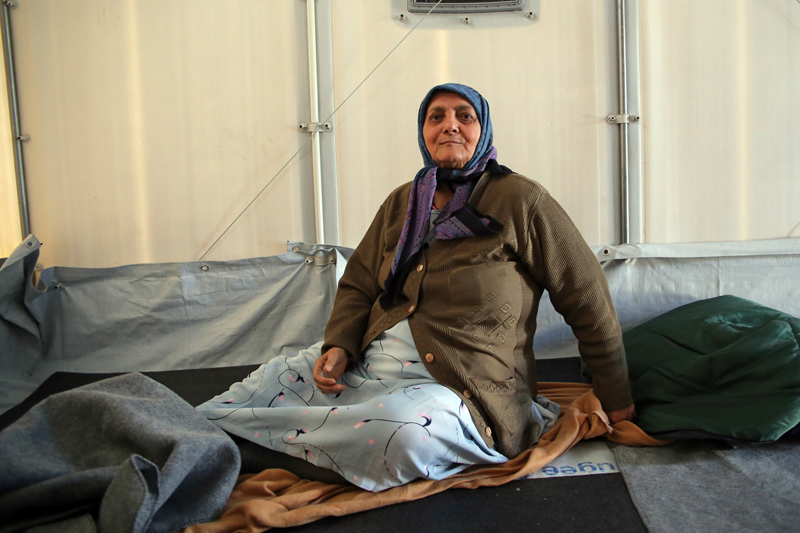 Arefa Omar rests before the family carries on their journey.

‘You lose loved ones’

Mustafa, 24, fled Al-Zerba with his sisters, cousins and their three young children from Russian bombs, one falling just 100 meters from the family’s doorstep. Mustafa studied international business in Malaysia and had only recently returned to Syria before he was forced to flee. Roaa and Rola, two of his sisters on the same journey, studied law and political science and were both close to graduating before the war took this, and much more, from them. “You lose loved ones, see people dying around you and kids that are hungry and this becomes normal, a part of life,” Mustafa told DW.

“If you try to cross the border from Syria to Turkey the Turkish authorities will shoot you, it’s up to your luck. If we stay in Syria we die, if we try to pass the border if you are not lucky you will die.”

UNHCR spokesperson Boris Cheshirkov told DW the demographics of people making the perilous journey to the Greek islands have shifted, with more women and children arriving, now accounting for 60 percent of the flow. In September 2015, one in nine arrivals were children, now they are one in three. “Many are trying to reach relatives and family members in the region. It’s a shame they are not able to do so in a safe way and are forced to take dangerous boat journeys. There should be credible alternatives and in the absence of that desperate people are forced to resort to smuggling networks.”

And they keep on coming

More than one million refugees, asylum seekers and migrants travelled across the sea to Europe last year, with 800,000 of these people crossing the Aegean Sea from Turkey to Greece, most coming to Lesbos. “We’ve already had more than 70,000 arrive this year [on Lesbos alone], and if we compare that to last year, that’s already more than the first six months. Not only that but in January of 2015, that record year, there were 742 arrivals for the whole month, we had that many just this morning,” Cheshirkov said.

UNHCR data notes that 91 percent of arrivals in Greece this year are from the world’s top 10 refugee-producing countries. Most people, by far, are fleeing Syria, followed by Afghanistan and Iraq. While the flow of refugees and migrants is on a scale Europe has not seen since World War II, never before in history have there been so many displaced people around the world, more than 60 million, Cheshirkov said. “Europe is the richest union in the world. It can manage this situation, it shouldn’t be an emergency.”

Austria’s decision in February to introduce a daily cap of 80 asylum claims and to only let 3,200 people pass through is having ripple effects all the way down the Balkan route with Macedonia closing its border with Greece to all but a trickle of Syrians and Iraqis, leaving more than 13,000 people stranded. Greek Migration Minister Yiannis Mouzalas has estimated that 50,000 to 70,000 people could be stuck in Greece this month, unable to move on, overwhelming the mainland’s response capacity.

A new life in Germany?

Back at Kara Tepe, a thunderstorm is brewing as the two families prepare to leave and catch the ferry to Athens. Thick raindrops start falling. A rainbow appears beyond the camp, over the Aegean Sea, and children gather to admire it. Movida and Imad’s youngest son, 11-year-old Maher, makes a heart gesture with his hands. “I love the UN,” he says.

Boarding the ferry to Athens at the Mytilene port, the Alhamoud and Omar families are in high spirits – although anxious about the situation at the border with Macedonia. Along with hundreds of others on the same journey, they hope to find a place where they can finish their education, look for a job and live in peace. Volunteers hand out hot tea, chocolate eggs for the children and packs containing a set of gloves, a scarf and beanie for the colder climates ahead.

Travelling together to the border, the two groups have formed a close friendship, united by a common cause. They have their pictures taken in a field, with Imad trying to maneuver the wheelchair given to them for Arefa when they arrived on Lesbos through the rough terrain.

Days later and the two families are still waiting at the Greek-Macedonian border, staying in small tents at a camp near the town of Idomeni.

“The situation here is bad, it’s very crowded. Last night was raining and the water came in our tents,” Mustafa informs DW via WhatsApp.